The Tokyo 2021 Olympics have taken a stronger stance on sustainability than any previous Olympic Game. (impactscool.com)

The Tokyo 2021 (previously 2020) Olympics is getting considerable press as a ‘green’ games. Both Japan and the International Olympic Committee (IOC) are using the games as a public example of their commitment to net-zero emissions and the Paris Agreement.

The games have a stated goal of working “towards zero carbon” emissions. There are a number of environmental initiatives being put in place, including use of 100% renewable energy and recycled materials.

The Tokyo Olympics promise to be the greenest of the modern era. This is a welcome change for an event that previously hasn’t had great environmental credentials.

The History of the Olympics and the Environment

The Olympics is not a small event. Major infrastructure projects are required and hundreds of thousands of athletes, spectators and workers travel to the games. Looking back on previous Olympics, the carbon footprint is typically quite significant.

The Rio de Janeiro and London games produced an estimated 3.6 and 3.4 million tons of CO2 equivalent respectively. Most of the emissions comes from accommodation and transport. To put this in perspective, it is equivalent to the average emission of 875,000 people over a year.

Historically the Olympics have not done a whole lot to help promote environment and clean energy. However, there has been some action.

Unfortunately, the positive example of Sydney did not flow on to all subsequent games. The Athens 2004 games were assessed on the Sydney benchmarks. On a scale of 0-4 the Athens Olympics scored a woeful 0.77. This largely stemmed from a lack of planning that didn’t consider resource use like water conservation and preserving natural lands.

The Failure to Meet Environmental Commitments

For the 2014 Winter Olympics in Sochi, Russia committed to delivering the first zero waste Olympics. However, reports came out that during construction, there was evidence of waste dumping, blocking of migration routes of animals, problems for locals accessing clean drinking water and a reduced quality of life for many residents.

The London games fared better, achieving 31 of 39 environmental targets. However, it dropped its carbon offset pledge when it couldn’t find enough offset projects in the United Kingdom.

Rio de Janeiro was generally regarded as a failure of an environmental games. Although it did plan to offset its carbon with support from “sustainability partners” and the State of Rio de Janeiro, the actual success was minimal. Only 8 million of the planned 34 million trees were planted and less than stellar results have been released for the carbon offset support provided by “sustainability partner” organizations.

The Olympics gain the attention of the world and thus represent a huge opportunity to spread the environmental message. Thus far it has failed to deliver.

Tokyo 2021 Has Taken A Different Stance

Tokyo 2021 has the opportunity to set things right and seems to be making all the right moves.

This is highlighted by the strong focus on net-zero carbon, which is being supported with direct carbon cutting measures in conjunction with a carbon offset program. Carbon offsets have been claimed by previous games (Sochi and Rio de Janeiro), however Tokyo has developed a transparent program, with set requirements, that promotes efforts across the country.

Additionally, Tokyo, compared to previous games, has undertaken a much wider range of environmental measures. These include use of renewable energy, clean transport, recycled materials and waste management. Beyond the numerical effect of reduced emissions, these measures send out a positive message to the rest of the world.

Why is Tokyo 2021 Taking a Strong Environmental Stance?

The Japanese government is using the games to highlight their own emissions targets. Japan has historically had a poor environmental record. As a result of heavy reliance on fossil fuels, Japan ranks 5th on the global scale of carbon intensity, and as of 2019 fossil fuels provided 88% of the nations’ energy.

However, Japan is changing, and the Tokyo Games appear to be a firsthand show of this transition. In October 2020, the Japanese Prime Minister Yoshihide Suga announced that Japan would reach net-zero emission by 2050. And even more recently, the country increased their 2030 fossil fuel reduction target to 46%, up from 26%.

The Role of the Olympics in Reaching Paris Agreement Goals

The Olympics is arguably the largest single event on earth. Therefore, the opportunity for Tokyo 2021 to send out a loud message for net-zero emission is unprecedented, particularly being only the second games after the historic 2015 Paris Agreement. This change can have a huge ripple effect across the globe.

Let’s hope that this time the Olympics can deliver on its environmental dreams and responsibilities. It has certainly made the right moves thus far. 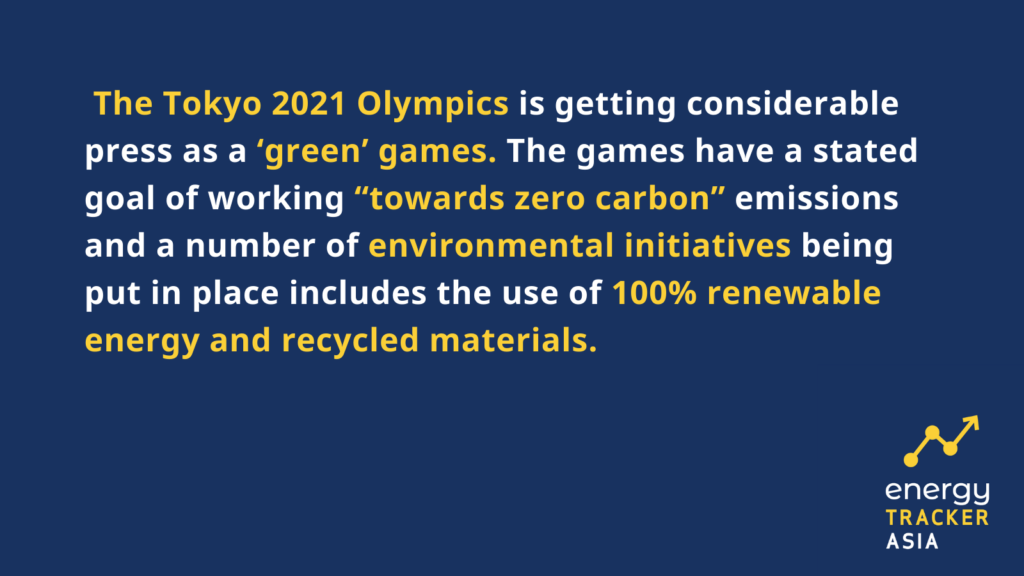