China has lowered the risk ratings for coal-power overcapacity in many parts of the country for the third year in a row. The move opens the door for more regions to build coal power in 2021-23 and has been interpreted by experts as a signal that coal will be a key part of the 14th Five Year Plan, which will start next year.

Every year the National Energy Administration (NEA) releases a “risk alert for coal power capacity planning and construction”, which looks ahead three years.

The 2023 Risk Alert, published on 26 February, gave a red rating for capacity adequacy – meaning there’s a high risk of coal power overcapacity – to just three regions. Orange ratings increased from two to three, and all other regions were rated green.

The alert’s resource constraint assessment, which tracks coal and water availability, remained unchanged from last year, with the same 12 regions rated as red. As for profitability, ten regions were rated red – meaning operations are likely to be unprofitable – and the number of orange regions dropped from two to one.

While profitability warnings are only advisory, a red or orange rating for capacity adequacy or resource constraints means binding restrictions: these regions cannot approve or start construction on new coal power projects intended to supply local demand; only a green rating gives permission.

Over the past three years, the risk alerts have seen the number of regions with red or orange warnings for capacity adequacy and resource constraint fall from 26 to 17 to 13 for the years 2021, 2022 and 2023. 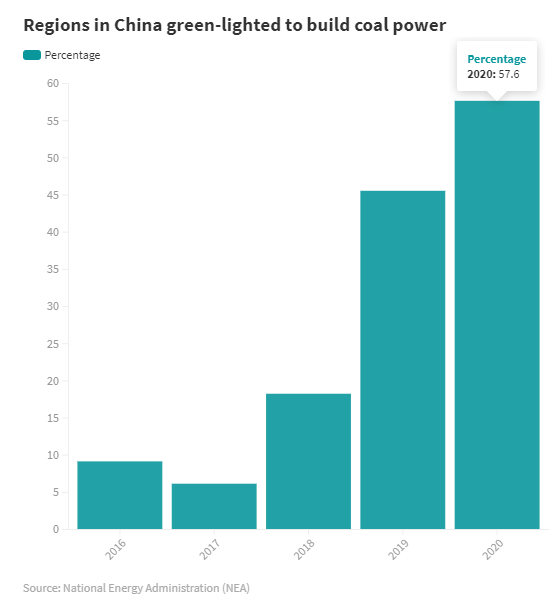 The justification for the risk alerts dates back to 2014 when many coal power projects got underway after approval powers were devolved to the local level, explained Yuan Jiahai, a professor at the School of Economics and Management at North China Electric Power University, in his recent Caixin column. He wrote that the 13th Five Year Plan (FYP) target of increasing China’s coal capacity by 200 gigawatts (to a total of 1,100 gigawatts) was a retrospective acknowledgement by government that these projects were already being built. Aware of the overcapacity risk, the state adopted a traffic-light early warning system in case it needed to cap coal power capacity at the local level – with the aim of slowing new plant construction.

This system is flawed, in Yuan’s view, because the process for calculating capacity adequacy is opaque, and doesn’t consider other factors such as the role of transregional grids to share power, and demand response, which can reduce or shift demand during peak periods. Similarly, the indices for resource restrictions and profitability are not an accurate reflection of local environmental limitations or operational challenges of the coal power sector.

Yuan argues that the risk alert was intended to be a braking mechanism on the coal sector but is instead heralding a repeat of the massive coal investment witnessed in 2014. The national energy authority is currently drafting the 14th Five Year Plan for energy and Yuan points out that “publishing a risk alert dotted with green lights at such a sensitive time is sending a very clear signal”. The change may be a response to a highly controversial report from the China Electric Power Planning and Engineering Institute that predicted nationwide power shortages after 2023. This led to more calls for coal power expansion in the 14th FYP to ensure supply. Yuan told China Dialogue that the easing of restrictions may reflect the NEA’s concern with ensuring energy security after 2023.

However, as Yuan points out in the column, coal power utilisation rates were already low from the beginning of the 13th FYP period. They fell even further in 2019, according to a March report from Global Energy Monitor, the Centre for Research on Clean Energy and Air (CREA), Greenpeace and the Sierra Club. The report also found that annual coal power capacity additions are worsening the capacity surplus and that shelved projects are restarting as restrictions are relaxed. Lauri Myllyvirta, lead analyst with CREA, told media that “there are still voices within China supporting thermal power and hoping to see hundreds of new coal power plants built by 2030. This is clearly contrary to China’s international commitments on climate change.”

The risks of coal power inertia

The worsening over-supply of coal power is a risk to the industry itself.

But even without international treaties, market factors will leave assets stranded, and possibly to an even greater extent. Carbon Tracker’s report assesses the risk of Chinese coal power assets stranding as “extreme”. It found that 70% of the country’s operating coal plants cost more to run than the cost of building new onshore wind or utility-scale solar PV. If China continues operating these coal plants then it risks stranding investments worth US$160 billion. The report recommends that China “cancel all under-construction and planned capacity immediately [and] increase utilisation rate of existing fleet through selective retirements in oversupplied or uncompetitive provinces”.

In a recent article, one of the authors of the report, Matt Gray, calls for China to avoid funding coal power investments in any post-epidemic stimulus package.

The changing role of coal power

Yet restrictions are being relaxed and new projects are getting underway. Figures from Global Energy Monitor show that in just the first 18 days of March, China approved the construction of 7.96 gigawatts of coal power – more than the 6.31 gigawatts approved during all 2019.

There is nothing similar for wind or solar power, which are still waiting for the energy authorities to extend grid connection deadlines for already approved projects so that subsidies can be disbursed.

So why, with the cost of renewables falling and a global energy transition underway, is China pouring money into an unprofitable sector at risk of asset stranding?

Yuan Jiahai told China Dialogue the answer is to do with stability and size. Coal is a controllable and reliable source of power that makes stabilising the power grid easier. Also, large coal power construction projects are better suited for a quick economic boost than much smaller renewables projects. Yuan thinks the sudden spurt of power plant approvals in March shows that local governments were keen to soften the economic impact of the epidemic by stabilising investment and spurring the economy.

Qin Haiyan, secretary of the China Renewable Energy Society’s wind power committee, points to the role of coal power lobbying and conservative attitudes toward renewables. “Some people continue to think wind and solar can’t replace coal. That we have to rely on coal to ensure our power supply,” he told China Dialogue. “There’s no consensus yet on the strategic direction for China’s power industry.”

Based on his team’s research, Yuan wrote in his Caixin article that low-carbon sources could meet new electricity demand in China during the 14th FYP. In a power system that relies much more on renewables, coal power could act as a “regulator” to provide safe and responsive backup.

The article is authored by Gao Baiyu and originally published in China Dialogue.